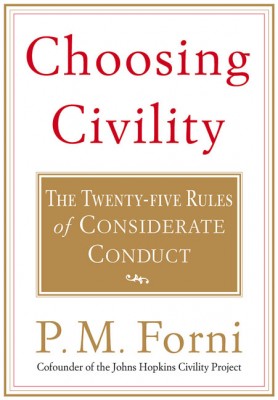 This book review on “Choosing Civility: The Twenty-Five Rules of Considerate Conduct” was first published in 2013 and updated on 2/20/19.  In December 2018, P.M. Forni died; the New York Times obituary with a reference to other works can be found here. In his book on civility, he made a compelling case that our children need to learn civility for their own happiness.

As a young girl with three brothers, I naturally had more urgent goals than civility.  My correcting  them with “No! Uh-uh! That’s not true!” was rather commonplace as the only sister.  Contradicting them was either sport or defense, depending on the day.  Imagine my confusion when P.M. Forni, author of Choosing Civility: The Twenty-Five Rules of Considerate Conduct (New York, St. Martin’s Press, 2002), declared “…contradicting for its own sake should be banned as utterly uncivil.”

Who knew? Even now, as an adult, contradiction in conversation sometimes seems to be the wheel on the bus. It makes conversation go round and round. It keeps things moving.

Yet, I am now convicted of having been “utterly uncivil.”

Forni’s book can be a mirror for those of us wondering how our manners compare to a civilized norm. Contemporary expectations for civility seem rather low. But Forni’s goal, addressed in Part One, was to “make a persuasive case for making civility a central concern in our lives.” He condensed what he described as a long history of manners, civility and social skills into Part Two’s “25 essential rules.” Then he adapted them to our modern needs.  In Part Three he lamented how weakened authority of parents and teachers make the transmission of a well-grounded civility more difficult than ever.

Choosing Civility with a Biblical Cast

Being a secular book of rules, a Christian might find it lacking in inspiration and authority. If that is you, you can make Biblical analogies. For example, Forni’s simple rule Listen can be amplified using James 1:19 (be quick to listen and slow to speak).  Be Inclusive could be restated using James 2:1-13 with its call not to show partiality.  You may easily restate many of his other rules with a Bible concordance.

But Forni reminded us that “many people don’t have a source for standards of civility.”  He apparently wrote this book to that audience.  Encouragingly, he offered love as an ultimate goal by writing “Manners are the first steps of the soul toward love.”

As you read Forni’s rules, you may notice those that stand out for their striking usefulness in your own home—areas where your family struggles to consistently choose civility. For example, consider the rule Acknowledge Others.  Do you acknowledge your children when they enter the room and you are on your tablet? Do your children acknowledge you when you come near and they are playing on the Wii?  Does your child facing a screen acknowledge a guest who has arrived?

I remember the day my son stood up from his computer to welcome his grandmother with a hug at the front door (even though he was in the middle of a game with friends). My heart felt gently dipped into warm sweet chocolate.  I do have a much greater adult appetite for civility than I did as a child; civility is satisfying.

Does Your Child Behave Civilly When Using His Technology?

Other expressions of civility suggested by Forni include Pay Attention, Speak Kindly, Assert Yourself and Apologize Earnestly.

Forni wrote “Respect for others requires that you don’t make them the targets of sarcastic remarks, you don’t belittle them or their accomplishments, and you don’t laugh at them.” This is done regularly online! If you haven’t heard this when your children are playing, you probably aren’t listening closely enough. A child’s soul can become comfortable with rudeness if they hear it too much from other players. Let’s challenge our children to raise the bar of kindness, especially during action games.

We can model for children how to use technology with manners.  By training them in civility, according to Forni, we help children anticipate the consequences of their words and actions. Forni noted that the quality of our lives depends upon our ability to relate and connect.  In Part Three he briefly cited studies that suggest people who experience greater civility live happier lives.

Forni closed Part Three by recognizing that parents and teachers have lost authority in recent decades. “The weakened authority of those who are entrusted with the task of promoting prosocial behaviors and preserving established values makes their message less credible and less likely to gain widespread acceptance.” But we can push back against this tide in our own living rooms.

We start by being aware that a family’s manners vis a vis technology does matter.  In some cases we can apply a simple Biblical standard. In others we need to construct a new rule of behavior.  Consider this: Is a mother frustratingly uncivil in a child’s viewpoint to require that he immediately quit a game? Even when the game he has been playing for 30 minutes will end and score itself in the next sixty seconds? Or is the child rude for not exiting immediately when asked—and expected not to need the closure?  Technology creates a need for new empathic parenting responses. Stopping digital gameplay is not the same as walking away from a Monopoly board and only needing to remember who’s turn is next.

It is not readily apparent to children that the quality of their later lives will be enhanced by adopting common civilities now.  It is up to us to translate modes of civility and manners to our lives lit by screens.  Forni made a compelling case that our children’s happiness depends on it. It is as relevant today as it was when he published Choosing Civility in 2002.

A related Forni book, “The Civility Solution: What to Do When People are Rude” (2010), can be found here.