SCROLL DOWN FOR KEY SECTIONS: “OUR BLOG,” “EXPLORE OTHER RESOURCES” AND “TELL THE CHILDREN.” FOR CATEGORIES, SEE RIGHT

Consecrate Some Screen Time to God

Setting the Stage for Parent-Teen Communication

Are You Initiating or Influencing Your Techy Teen's Interests?

Tracking Your Teen on His Technical Path

But I Can’t Stop Shouting…This Game is So Fun!

Please keep it down!

(You repeat) Keep it down!

Are your children typically boisterous in the house?  Expect the noisy trend to continue and grow when they play multi-player action/adventure video games.

If they play this game genre now, and the above conversation is familiar to you, the pattern has likely already been set. It will take some effort on your part to re-set it. They have become conditioned to screaming and cheering, moaning and groaning when their character is attacked by monsters, they discover diamonds, or another character tricks them.  They are typically innocently unaware of the volume of their racket.

These competitive games played with others can also bring out bursts of anger, either from themselves or their online “friends.” Other children playing with regularity often have an intensity that is heightened by winning and, of course, losing.  It becomes important to point out to your children that if they play with someone who is too regularly angry, they will want to avoid that influence.  Make no friendship with an angry man, and with a furious man do not go. (Prov 22:24)

Retraining entails reminding them (when they are not playing, and each time before they play) that playing video games in the house is the same as other inside activities—board games, building projects, crafting, and the like.  Conversation should be muted out of respect for others.   If they learn early to modulate their responses to reduce their raucousness, by the time they are teens they will be more likely to show self-awareness and self-control.

Resist the urge to move their computer into a far corner of the house to avoid the noise!  Train your children up, instead, to manage themselves, and the family may remain closer. Staying within earshot also allows you all kinds of insight into their problems and potential relating to gaming—but that is for another post. 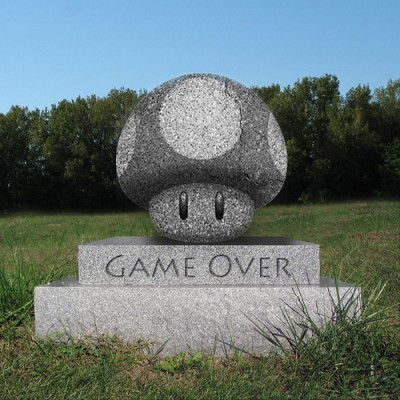 Is the Game Never Over?

Here are ten tongue-in-cheek ways you can begin to make a dent in Johnny’s videogame time. You may notice a little bit of yourself in them.

10.  Smash his Xbox; take a picture for your fridge.

9.  Set time monitor software on his Wii; when play time expires, prepare him for bachelorhood by teaching him how to vacuum.

8.  Demand he stop playing, wielding your vast positional authority as his parent.

7.  Coax him to read Great Expectations, employing only your potent personal power.

6.  Beg him to stop in the whiniest voice you can muster—that voice you once used on your parents.

5.  Trick him into stopping (your favorite dessert is on the table for dinner!) then hide his controller.

4.  Insist your spouse make him stop.

3.  Offer him more time later (when you need him occupied) if he stops now (when you are aggravated).

2.  Start him on creative, productive or service projects using your vast free time.

1.  Leave him alone, with all technology turned off, and witness his inspiringly creative self-management;
take a picture for your fridge.

Photo by Philip Wels via Compfight